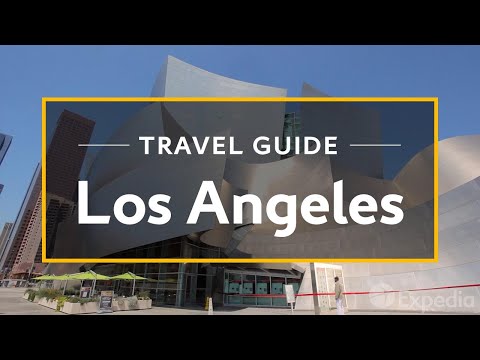 Los Angeles is situated in Southern California, on the West Coast of the USA. Home to 18 million people, Los Angeles is a collection of distinct cities that rolls out from the dry Santa Monica Mountains to the Pacific Ocean. L.A.’s sunshine, her entertainment industry and her openness to newcomers and new ideas has made the city a magnet to dreamers. Many of those whose dreams become reality, like Walt Disney and John Paul Getty, poured their wealth back into the city, helping make L.A. one of the great culture capitals of the world. Downtown Los Angeles is a center of global business and home to some of the finest examples of American civic architecture. It’s also the birthplace of the city. Wander down Olvera Street, one of the oldest surviving areas in L.A., to experience the colors and tastes of Old Mexico.

Just across the road from Olvera Street is Union Station, one of the world’s great railway stations. You’ll be forgiven if you experience a sense of déjà vu here; Union Station has been featured in almost 30 big-budget movies, including Pearl Harbor and Blade Runner. Stroll south to Little Tokyo, or J-Town as the locals know it, which is home to Buddhist temples, galleries and museums. While you’re there, why not try some super-fresh sushi? After all, the California Roll was invented right here! Half a mile to the west is the Walt Disney Music Hall. Looking like pieces of sheet music thrown to the wind, this stainless steel wonder is home to L.A.’s Philharmonic Orchestra. Hail a taxi for the short ride west to the Los Angeles County Museum of Art. The one-hundred-thousand-piece collection at LACMA houses works that span the ages, from the classical periods through the edgiest street art. Right next door is a very different kind of gallery.

At the La Brea Tar Pits and George C. Page Museum, remains of incredibly preserved mammals, insects and plants are continually excavated and brought once more into the Californian sunshine. Heading further west, along Wilshire Boulevard, the aroma changes from the smell of tar pits, to $ mon-neeey $ Welcome to Rodeo Drive, in the heart of Beverly Hills. This is the world’s most expensive and exclusive three blocks of shopping. But you don’t have to be a star to enjoy Rodeo Drive; most folks are content to window shop. But there’s more to Beverly Hills than just bling! Only a street or two away awaits a world of leafy boulevards and incredible homes and gardens. Head north to Hollywood, the epicenter of the world’s entertainment industry. Track down your favorite star on the historic Hollywood Walk of Fame, and catch a movie at Grauman’s Chinese Theater, the most famous first-run movie theater in the world. Take a walk on the wilder side of L.A., to West Hollywood. WeHo is a haven for artists and designers. As evening falls, boogie on down to Sunset Strip, home to iconic clubs such as The Viper Room and the Whiskey a Go Go.

♪ Boogie On Down ♪ Griffith Park is the largest and wildest urban park in America. Here, perched high on the slopes of Mount Hollywood, and offering superb views of L.A., you’ll find the Griffith Observatory. Built on land donated by mining magnate Griffith J. Griffith, admission to the main building and grounds is still free of charge, according to his wishes. Universal Studios is the oldest continually running movie studio in America. It features a theme park based around its blockbuster movies and popular TV shows, however the star attraction is the studio tour, which winds its way through acres of sound stages and back lots. And if you have that sense of déjà vu again, it’s no wonder – some of the sets have been featured in dozens of movies and are still in use today. 20 miles southeast of downtown is Knott’s Berry Farm. Originally a berry farm in the 1930’s, this theme park has grown into a family favorite with child-friendly rides, short queues and offers a real taste of America’s pioneering heritage.

Just down the road, in Anaheim, is Disneyland Park. Since its opening in 1955 over 600 million guests have delighted in seeing Disney’s much-loved characters brought to life. The Port of Los Angeles, the biggest container port in the USA, sits on San Pedro Bay. Climb aboard the USS Iowa, a World War II battleship which saw service in some of the most dramatic episodes in world history. Nearby at the Aquarium of the Pacific, 500 marine species sway, swirl and dive through the various marine systems of the vast Pacific, from the sun-drenched coast of Baja to the frigid waters of the Arctic. Long Beach was once the birthplace of California’s surfing scene, but a breakwater has now tamed the wild waves, making the beach an ideal destination for families.  From Long Beach, hop aboard a ferry, and take a one-hour trip to Catalina Island. Once the home of otter hunters, smugglers and gold prospectors, these days day-trippers and weekenders are far more interested in working on their golden tans and escaping the frantic pace of the mainland. Heading west from L.A., Santa Monica is one of the most popular resort towns in the US.

Santa Monica epitomizes the California lifestyle of sun, sand and the body beautiful! And right at her heart is her iconic pier. Things get a little funkier just down the coast at Venice Beach. Long the center of L.A.’s counterculture, Venice is more than just a beach, however. The main attraction here is the promenade. So pull on your in-line skates and join the colorful and sometimes bizarre human parade. After the craziness of Venice Beach, head 5 miles north to the tranquility of the Santa Monica Mountains. The Getty Center houses the extraordinary art collection of billionaire John Paul Getty.

Water features prominently throughout the complex, encouraging quiet reflection. Hire a convertible and follow the scenic Pacific Coast Highway to Malibu; 21 miles of prime Californian coastline scented with salt and coastal sage. Many of L.A.’s stars live in homes that cling to these dramatic hillsides by the Pacific,  which is the perfect metaphor for L.A.. A city built on an unshakable optimism and a devotion to creation – both human and natural. Welcome to the City of Angels� .